A 2019 U.S. Court of Appeals decision highlighted the importance of hiring a good SEC whistleblower attorney at the outset, before submitting a tip or information to the Securities and Exchange Commission (“SEC”).

In 2017, the SEC gave out whistleblower awards in connection with a case involving Deutsch Bank (the “DB award”).

The SEC also denied whistleblower awards to several other people in the Deutsche Bank case.  Three of them appealed that decision to the courts.  One of them was identified in court papers anonymously as “John Doe”.  The court case was called Kilgour, Williams & Doe v. SEC.

In 2019, the Court of Appeals upheld the SEC’s decision to deny a whistleblower award to John Doe. 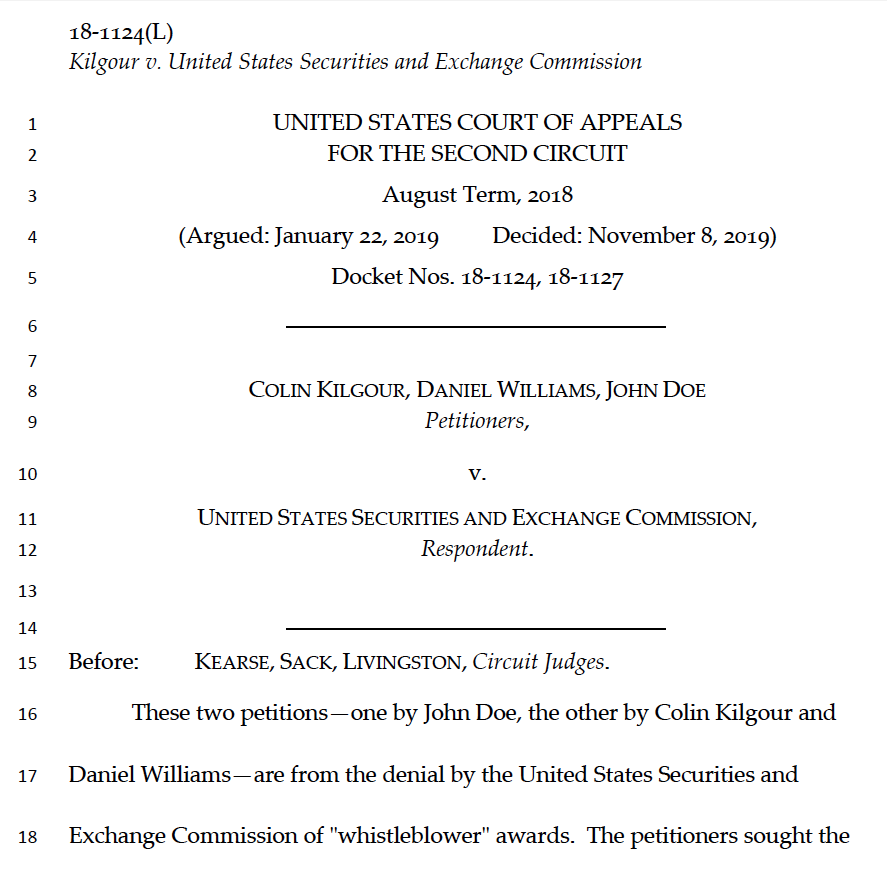 According to the court’s Opinion, the SEC opened an investigation into Deutsche Bank.  This was in June 2010, before John Doe contacted the SEC.  The investigation was being handled by a team of SEC attorneys (the “SEC’s DB team”).

Approximately three months later, John Doe met with enforcement staff in the SEC’s Complex Financial Instruments Unit (“CFIU”).  The CIFU staff he met with were not part of the SEC’s DB team.

The court explained that the SEC’s DB team found John Doe to be “very difficult to follow, as [he] jumped from topic to topic”.  They also said that most of the information that John Doe provided during their April 2013 meeting was duplicative of information that the SEC had already received from other sources.  (Court Opinion, p. 8.)

John Doe’s case illustrates some of the possible dangers faced by a whistleblower who decides to submit his or her information to the SEC alone, rather than hiring an experienced SEC whistleblower attorney at the very beginning before submitting anything to the SEC.

Some Ways In Which A Knowledgeable SEC Whistleblower Attorney Can Help

1. Up-Front Triage:   A former SEC Director of Enforcement explained that a knowledgeable SEC whistleblower attorney can help to curate or triage a whistleblower’s information “up-front”, and identify information that will be important to the SEC.

2. Writing The Form TCR:  A whistleblower’s initial tip on Form TCR is reviewed by the SEC’s Office of Market Intelligence (“OMI”).  If the OMI marks the TCR submission as “NFA” (no further action), it will not be passed along to enforcement staff responsible for conducting investigations.  Therefore, it is important that a whistleblower make a good first impression in his or her written Form TCR.

A skillful SEC whistleblower attorney can help a whistleblower to write his or her TCR submission in a compelling way that will hopefully have a better chance of resonating with the SEC’s lawyers and staff.  He or she can also organize the whistleblower’s documents in a way that will enable the SEC to understand what the documents mean and why they are incriminating.

4.  Assistance During Meetings:  It can be intimidating meeting with the government.  Also, while whistleblowers know what information is important to them, if they have not been trained as lifelong securities lawyers, they might not know what information will be the most helpful to lawyers at the SEC.

In these and other ways, a sophisticated SEC whistleblower attorney, with extensive experience representing individuals in SEC investigations, can improve a whistleblower’s chances of becoming eligible to receive an SEC whistleblower award and hopefully avoid a fate similar to John Doe.

For additional information about the John Doe case, click on the links below: