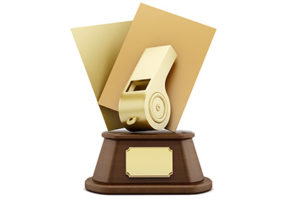 In 2010, the U.S. Congress created the Securities and Exchange Commission (“SEC”) whistleblower program.  A cornerstone of the program is the ability of the SEC to grant monetary SEC whistleblower awards.

To be eligible for an SEC whistleblower award, a person has to first provide the SEC with original and voluntary information about a securities violation or fraud.  The fraud or violation may have been committed by (i) an individual; (ii) a public company; or (iii) an investment advisor, broker dealer, or similar kind of banking or investment company.  The information has to cause the SEC to open a new investigation, or it must substantially contribute to an already ongoing investigation.

Then, if that information enables the SEC to bring a successful action in which it collects more than $1 million from the wrongdoer(s), an SEC whistleblower award will become available.  A “successful action” can be either a settlement or a judgment in favor of the SEC.  By law, the SEC whistleblower reward must be between 10% – 30% of the amount of money that the SEC collects from the wrongdoer(s).

Congress intended that the SEC whistleblower program “be used actively with ample rewards to promote the integrity of the financial markets.”  (See the Report of the U.S. Senate Committee on Banking, Housing, and Urban Affairs entitled “The Restoring American Financial Stability Act of 2010” (April 30, 2010) (the “Report”).)

Monetary Awards Are The “Critical” Component Of The SEC Whistleblower Program

Victims’ Money Is Not Used To Pay SEC Whistleblower Awards

SEC Whistleblower Awards Are Paid From A Separate Fund

SEC whistleblower reward payments are made from a separate Fund set up by Congress.  Title 15 of the U.S. Code states that all SEC whistleblower awards “shall be paid from” that Fund.  (15 U.S.C. §78u-6(b)(2).)

Sanctions and other money that the SEC collects through its enforcement efforts, and that are not earmarked to reimburse the victims of a fraud, go into the Fund to help pay SEC whistleblower awards.  (See the Report.)

The SEC has confirmed in writing that all SEC whistleblower rewards are paid out of the “fund established by Congress that is financed entirely through monetary sanctions paid to the SEC by securities law violators.  No money has been taken or withheld from harmed investors to pay whistleblower awards.”

Employers Cannot Require Employees To Waive Their Rights To Awards

To find out more about some of those rules, or for more information about SEC whistleblower awards, click on any of the links below: