SEC Whistleblower Award Rules:  Deadline To File A Claim For An Award

The United States Securities and Exchange Commission (“SEC”) brought a successful Covered Action against a wrongdoer.  Thereafter, the SEC’s Office of the Whistleblower (“OWB”) posted a Notice of Covered Action (“NoCA”) for that case.  The Commission denied awards to all of the claimants because they did not satisfy the SEC whistleblower award rules.  One of those rules requires that an award application must be filed within 90 days of the case being posted on the SEC’s NoCA list.

The Commission entered an Order Determining Whistleblower Award Claim.  That Order denied SEC whistleblower rewards to both of the two individuals who appealed their respective Preliminary Determinations. 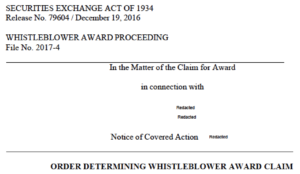 One of the two people who appealed had filed his or her application for an award in a timely manner.  That person’s award was denied for failing to satisfy other SEC whistleblower award rules, as set forth in the Order.

The second individual, identified as “Claimant 2” in the Order, did not file an award application until after the deadline set forth in the SEC whistleblower award rules had expired.

According to the SEC’s Order, when the Notice of Covered Action was posted, it “expressly stated that an application for an award submitted on Form WB-APP must be completed and returned to the OWB” by a certain date.

The 90-Day Period For Filing An Award Claim

The first one was Rule 21F-10(a), which says that award claims must be filed “within ninety (90) days of the publication of the Notice of Covered Action on the Commission’s website.”  If a claimant fails to file an award application within this 90-day window “the claim will be barred”.

The Commission found that “The record conclusively demonstrates that Claimant 2 failed to file a timely Form WB-APP”.

For additional information about SEC whistleblower award rules, click on the link below: