Trading Ahead Of News Announcements

Types Of SEC Cases:  Trading Ahead of News Announcements

Expedia Employee Charged With Trading Ahead of News Announcements

A former information technology (“IT”) employee of the online travel company Expedia consented to charges brought against him by the SEC for insider trading in which he was found to be trading ahead of news announcements.

Trading Ahead of News Announcements Through IT Hacking 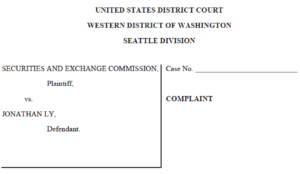 Specifically, the SEC asserted that Ly was found to have been illegally trading ahead of news announcements related to nine corporate news releases made by Expedia between 2013 to 2016.  The SEC alleged that Ly exploited his position as an information technology specialist, which granted him administrative access privileges, to hack into Expedia executives’ computers and e-mail accounts.  With this access, Ly was able to examine confidential documents, including e-mail discussions and pre-earnings reports.

One of the accounts belonged to Expedia’s head of investor relations.  It was supposedly targeted by Ly because it contained reports related to upcoming earnings announcements and discussions about how the securities market might react to the reports’ information when they were publicly released.  Ly then used this information to make personal trades in Expedia stock in advance of the Company’s public announcements (i.e., trading ahead of news announcements).

As explained in the SEC’s press release:

“Ly allegedly exploited his role as an IT professional by stealing passwords and posing as other users in order to access Expediaʼs confidential information,” said the Director of the SECʼs San Francisco Regional Office.  “Lyʼs alleged insider trading scheme continued even after he left Expedia when he secretly kept a company laptop and connected remotely to Expediaʼs network to steal confidential information.”

Profits Obtained Through Trading Ahead of News Announcements

The SEC accused Ly of obtaining approximately $350,000 in ill-gotten gains from his hacking and trading ahead of news announcements scheme.

Ly consented to the following fines and penalties:

Whistleblowers Can Report Insider Trading, Including Trading Ahead Of News Announcements, To The SEC

However, the SEC has not made any public statement as to whether this case was itself an actual SEC whistleblower case.  The SEC Office of the Whistleblower posts Notices of Covered Action (“NoCA”) for Commission actions where a final judgment or order results in monetary sanctions exceeding $1 million.  The NoCA list does not disclose if a particular Enforcement action was brought as the result of an SEC whistleblower case, tip, complaint, or referral being filed with the Commission.

For more information about insider trading involving trading ahead, click on the links below: